The Crown’s Call, an epic saga of cosmic proportions, takes place in the Circeae System,
exploring the onset and aftermath of a religious holocaust in a space opera setting.

Circeae is Latin and translates to “daughter of the sun.” (It also ends with ae, which are my first two initials.) 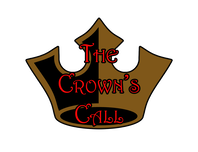 The Circeae System is home to many beings, just like us. There’s nothing spectacular or outlandish about them, but they do have space flight technology that allows them to travel the system with relative ease.

The religious beliefs of the System are widespread, but the focus of The Crown's Call is the Logia. They are believers in truth, justice, honor, and good. Their counterparts are the Strages, but little is known of them aside from the fact that they are pure evil. They are apathetic toward humans, and act cruelly and thoughtlessly.
The first series, Heralds of the Crown, encompasses three stories concerning a space legend of the Circeae System—KinCade. He is a famous space sailor who becomes the Divine Warrior for the Crown—the Triune God of the Logia, comprised of the Creator King, the Ruler Prince and the Eternal Companion.

Poison, the first book of the series, tells the story of Gaultier Lassiter and Hanileh—KinCade’s parents—as well as the downward spiral of the villain, Lucian Thaedrial. Thaed, as he will come to be known, has a deep influence throughout the entire saga.

KinCade’s full story is told through Raven Criswell in the book, Fusion. It’s an extraordinary fantasy tale with influences from Clash of the Titans and the Sinbad the Sailor stories. We meet mythical creatures like the Forsaken Queen of Sagesse, and the Continuum as well as “everyman” characters simply struggling to get by day-to-day.

Reconciled sets the story for the rest of the saga. Raven, obsessed with losing her brother, makes a valiant attempt at a rescue, but only finds herself in trouble. She must face her own faults and flaws before confronting her adversaries.
The second series, Rise of the Crown, with books Sovereign, Ransom, and Valor are allusions, retelling the story of Christ in a science-fictional setting.

Sovereign is set amongst the system in chaos. Ruled by a tyrannical king, the people of Circeae hope and pray for a new ruler. The evil king, while dying, plots to prevent the rightful heir to the throne from succeeding him. Followers of the Crown step in to protect the young Ruler Prince.

Ransom starts with the rise of Prince Ternion, the Ruler Prince. As he comes to power and the Logia become more prevalent, a great unrest settles among the people. The system is prosperous and just under his rule, and most are happy. But the Strages are on the move, stirring up doubt. Led by Thaed, the Strages set one of Ternion’s closest advisors and friends against him. Lives are destroyed, some even lost, as Prince Ternion is deposed and executed. The Progressive Legacy, under the leadership of Thaed and two others, takes control of the System.

Many years later, Valor sets up the resurrection of Prince Ternion. Twin brother and sister—Seraph and Selah Gunner—walk two very different paths to set events into motion that will see Prince Ternion rise again. We meet the crew of the ship Valor’s Fool who perform daring missions against the Legacy on behalf of the Ghosts—a band of freedom fighters founded by Redic Clairet, a loyal follower of Prince Ternion and father of the twins. The crew unites the twins, who successfully fulfill the prophecy concerning Ternion’s resurrection. However, the circumstances are different than they had hoped. Ternion is not there to stay and defeat the Legacy. Instead, He empowers His people to stand strong and promises to return again one day.
Five books comprise the third series--Touch of the Crown. These stories include characters who are not directly connected to the Crown, but do find Him in some way.

Excelsior is set within the ranks of the Legacy. We explore the lives of Alexandra (Alex) Martin and Brendan Faulkner, two Legacy pilots on two different career paths. When Alex is assigned to Brendan, who is captain of a squadron of precision aerobatic pilots, she meets obstacles and conflict. The squad is ordered from performance, to defense, to strike, and they must decide to comply or defy. This story is about wrong choosing right and finding redemption.

Spider weaves the story behind the bounty hunter, Taran Harker, who is found in Valor. Raised as the daughter of a Zenith, Taran has a pretty good sense of right and wrong. But she is all too easily caught up in a deadly game. Her father’s enemy initiates a dangerous relationship, bringing down both Taran and her family. Perhaps it is revenge, perhaps justice, but Taran's path will lead her to join the ranks of the Legacy bounty hunters—heartless bionic creatures with one goal in mind…their prey.

Outlaw is also set within the Legacy, but on a different level. Instead of the military, this one focuses on the Elite—the affluent sector of the Legacy. With influences from The Scarlet Pimpernel and The Count of Monte Cristo, we follow Britt, Laney, and Cole as they make internal strikes against the Legacy. In the midst of the Elite, they gain intelligence and positioning that allows them to move in ways the Ghosts cannot. Something, however, goes drastically wrong on one mission, causing Britt to question his motives.

Traitor tells the story of a young girl who stows away aboard a cargo transport ship. When she is discovered, the crew must decide what to do with her. Instead of turning her into the Legacy, they allow her to stay. Before long, they are boarded, and her true identity is discovered.

Pandemic falls late in the timeline, setting up the fall of the Legacy. We follow Brielle as she faces vaccination mandated by the Legacy. Instead of acting as a cure, however, she discovers the vaccination is actually a means of extermination.
_ The last trilogy, Champions of the Crown, follow the Logia and Ghosts as they approach the final conflict that will resolve the series.

Shattered takes us beyond the system into the dimensions of the Strages. Shattered is a sequel to Valor. While Valor followed Selah, this one gives attention to Seraph. His encounters with the Legacy lead him to believe that he is crazy. He begins having visions and seeing things in mirrors that aren’t there. Eventually, he crosses a supernatural barrier that allows him entry into a completely different world where he meets Echo. Together, they battle an evil whose power has yet to be matched.

Asylum tells the story of Chase Leighton, a Logia who loses his wife, Trista, to the Legacy. It is revealed that she was not murdered, but her memories were tampered with. She walks freely among the citizens of the Legacy. Chase is captured and sentenced to a prison ship for the criminally insane. He and his crew manage to take over the ship, when he finds Trista onboard.

And finally in Restoration, years later, Redic Clairet passes away. The children of the Ghosts now find themselves taking over the leadership. The conflict goes far beyond the Ghosts and the Legacy, though. The battle is between the Crown and Thaed—good and evil. Thaed manages to get under the skin of Elia, Seraph’s daughter, and spirits her away. He manipulates her to suit his purposes, eventually turning her against her family and the other Ghosts/Logia. During a final battle, Thaed is defeated, restoring the System to Logia rule. The glory of the Crown returns.